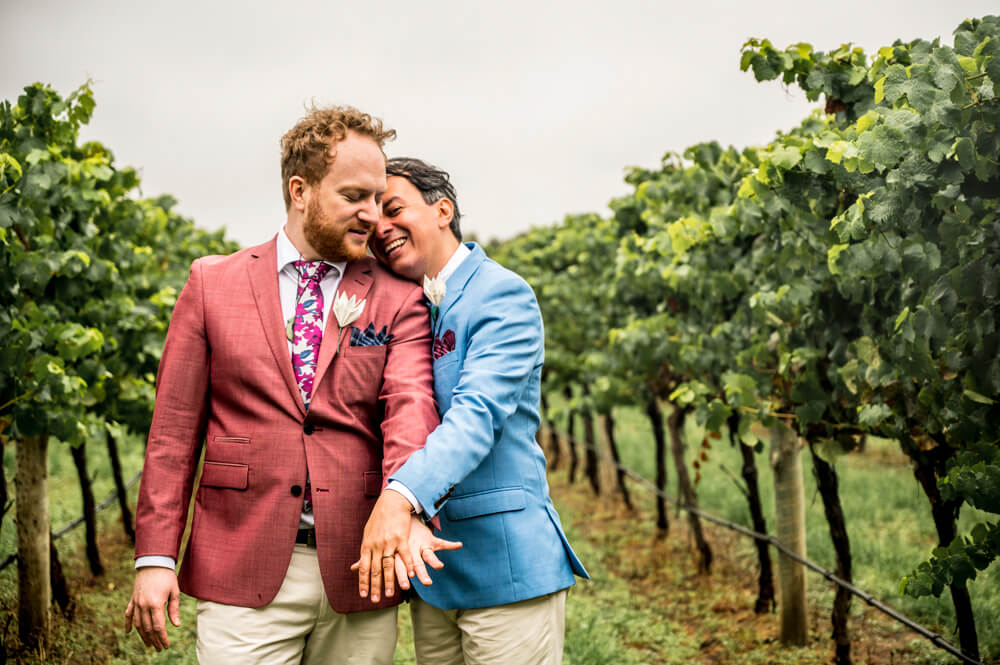 Elenckey, a writer of film/novels from Brazil and Boyd, an opera singer from Australia/New Zealand both found themselves in Bologna, Italy for work and study when they met online.

Deciding to meet in person Boyd invited Elenckey to have a cup of tea at a nearby tea salon and he replied ‘I don’t drink tea’. As a tea fanatic who didn’t drink coffee Boyd immediately thought ‘well… this will never work’.The couple managed to find a nice café that did good tea and coffee and had an enjoyable time.

Boyd mentioned he was performing with the Bologna Opera the following night and Elenckey agreed to come along spending the last €15 he had in his bank account to buy a ticket – way up in the top balcony – to see Boyd perform.

The couple caught up afterwards over pizza and a few nights later  went to a Brazilian Samba party where Boyd met Elenckey’s friends and seven years later they are husband and husband.

In 2019 work schedules meant they were in different parts of the world and video calls were invaluable.

A time of substantial transition ensued being based in Shanghai, China for many years and relocating to the US. Perhaps unromantically, they decided over the telephone that they wanted to be married and practically it would be helpful. Although there was no dramatic proposal Boyd was with a group of friends when the rings arrived a few days before the ceremony when Elenckey grabbed one, got down on one knee and said ‘Will you marry me?’

The couple knew from the outset that wedding day planning would be complicated. Each being from different continents and having many friends overseas, things like deciding the best country to get married in, what time of year, how to have it suit their ideas whilst also working for those they wanted to attend was a lot to take on. 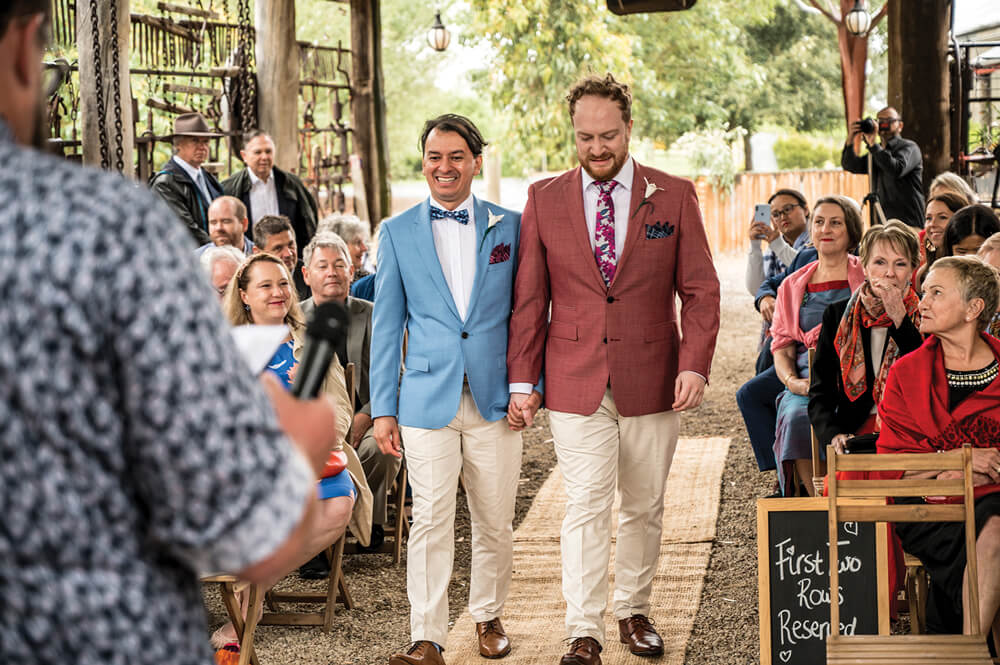 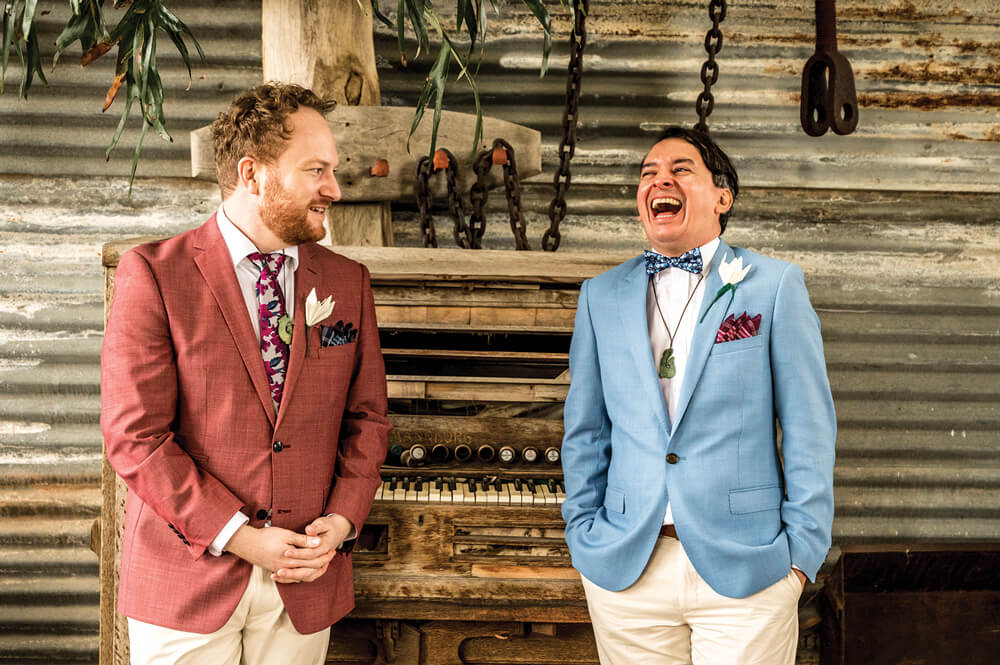 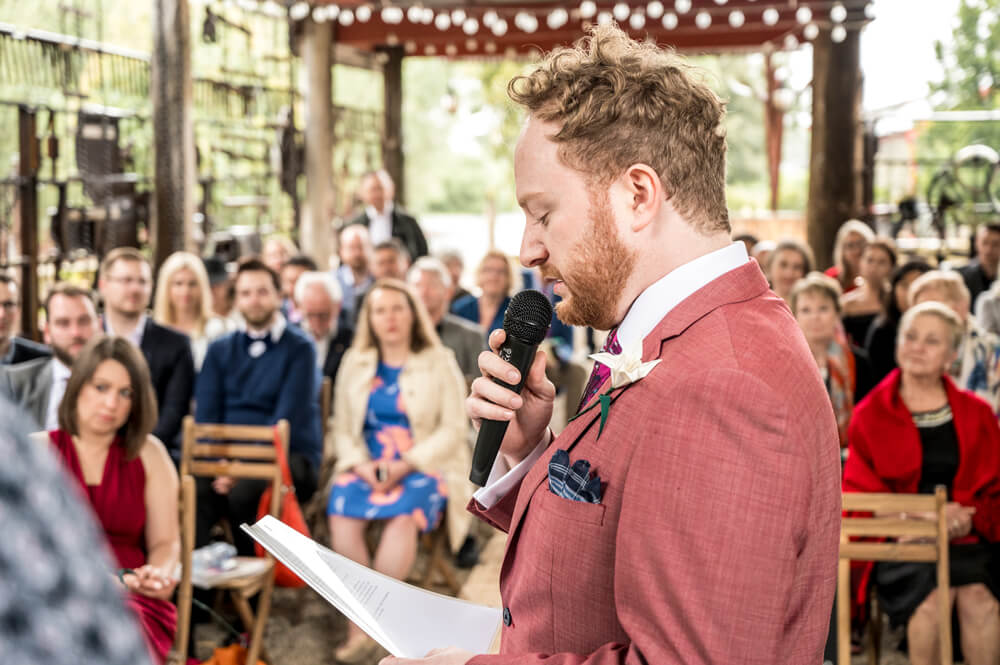 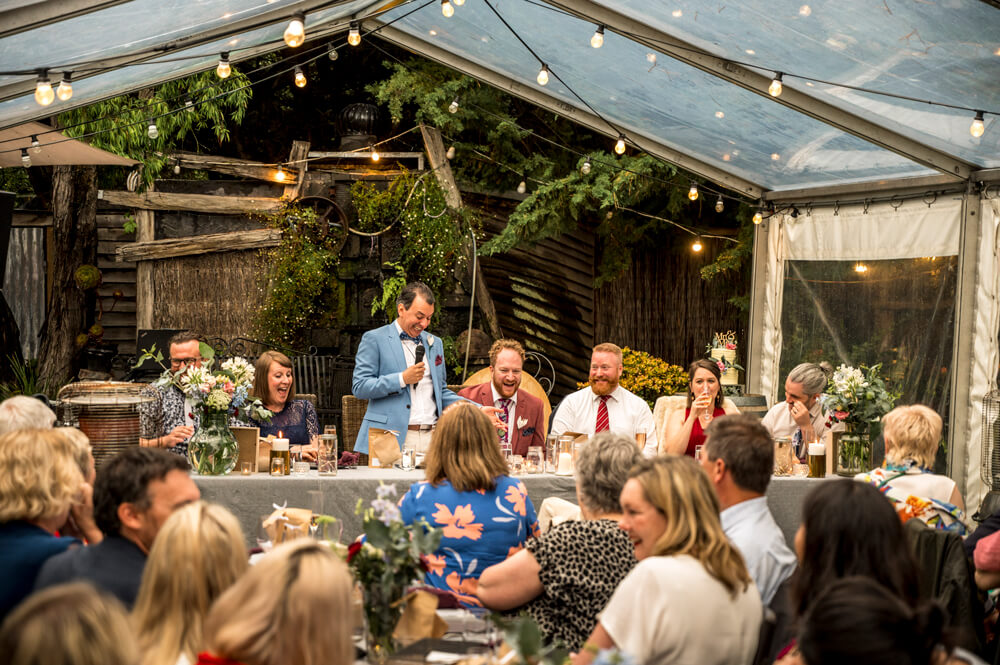 Working with a limited budget and knowing where they decided to marry that they would not be able to arrive ‘on ground’ until right before the wedding itself they had to make planning work from a distance. At times they thought to give up on a full wedding and to grab a celebrant, some friends and go have a nice dinner after signing some papers.

However, for a few different reasons, the couple knew they wanted a day to celebrate with a proper wedding with friends and family around. They called on friends willing to help and were fortunate to have a few who had been part of many weddings before and able to give great advice and guidance meaning only having to pay for the things that really needed to be done by experts.

n the end it gave a very special personal touch to the whole experience. One friend baked their cake, another organised flowers, others sourced guest gifts, one sang during the ceremony, another led the ceremony and even the celebrant was found through mutual friends and Boyd’s brother was DJ.

They had a general idea of what to wear and spent several weeks in many, many stores trying on all kinds of options. In the end the look came together almost like a scavenger hunt as they ended up weaving things together from seven different stores.

The final piece were their ties. Boyd had all but given up finding exactly what he wanted when at 7.30pm the night before the big day he was walking past a store and saw one which he liked the look of on sale for $10 so bought it on a whim.

One final touch which he knew he wanted to add himself were some origami lilies which he crafted for the boutonnieres.

The couple then allocated most of the budget holding the wedding at Oakdene Winery where they were able to have the ceremony, the reception and the wedding night accommodation in one place.

They dealt with one team who oversaw the whole day making sure every detail was taken care of.

Due to the logistics of travelling from overseas, the couple relied on a venue and team where they could essentially just turn up on the day and know that everything was organised. All this resulted in a day that truly was a dream.

Boyd and Elenckey loved every minute of it and even though it poured with rain the whole time they didn’t really even notice as they were having such a great time.

Fortunate to have their wedding just before the world began shutting borders all their guests were able to attend – but only just. In fact, some who had come from China were not able to return and are still in other parts of the world.

Travelling to Brazil after their wedding to visit Elenckey’s family who had not been able to attend was when the situation dramatically escalated around the world. Boarders began shutting, people were getting trapped in foreign countries and over the course of a few days Boyd had all his opera contracts for the next year cancelled.

Elenckey stayed in Brazil to be close to his family while Boyd returned to this side of the world and thought they would  work out what to do after that. That was back in March 2020 having been married just a couple of weeks and they’ve been apart since.

The couple celebrated their first wedding anniversary apart and still don’t know when or how it will be possible to see each other again.

Although it has certainly been a memorable first year of marriage, 2020 holds some of the best memories of for them – and also some of the most difficult.

Elenckey was unable to have any friends or family join him on the day which was sad so we worked hard to have them there through letters we read out, videos they sent and having a live stream for them all to watch back in Brazil.

In addition it was only a few years prior that Australia had passed marriage equality and Boyd had personally been through more than two decades of religious ‘conversion’ change and suppression practises which had tried to ‘cure’ him of being gay.

To be able to legally, proudly and whole heartedly stand before their friends and family as they became husband and husband was a moment he never dreamed he could have and will never forget this experience.

The couple say a wedding on a budget is absolutely possible and can be amazing. A little bit of creative thinking and some good friends with crafty ideas can create magic and meaning and is a lot of fun.

Try to have everything that needs to be remembered or actioned on ‘the day’ delegated to someone else. Boyd and Elenckey did not have to think of anything when the day finally arrived which meant they could enjoy every moment. 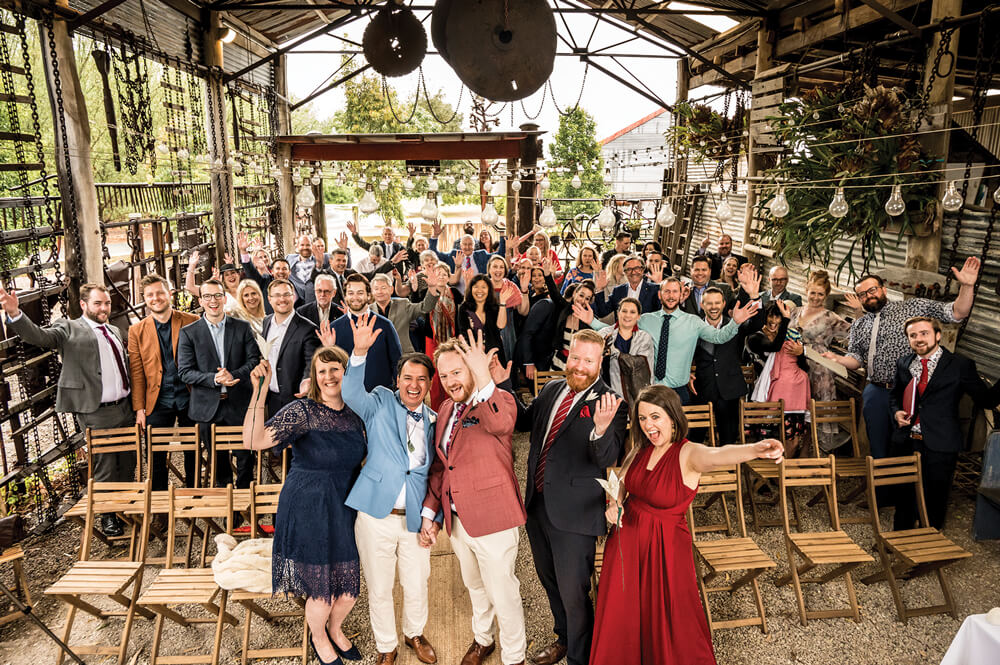 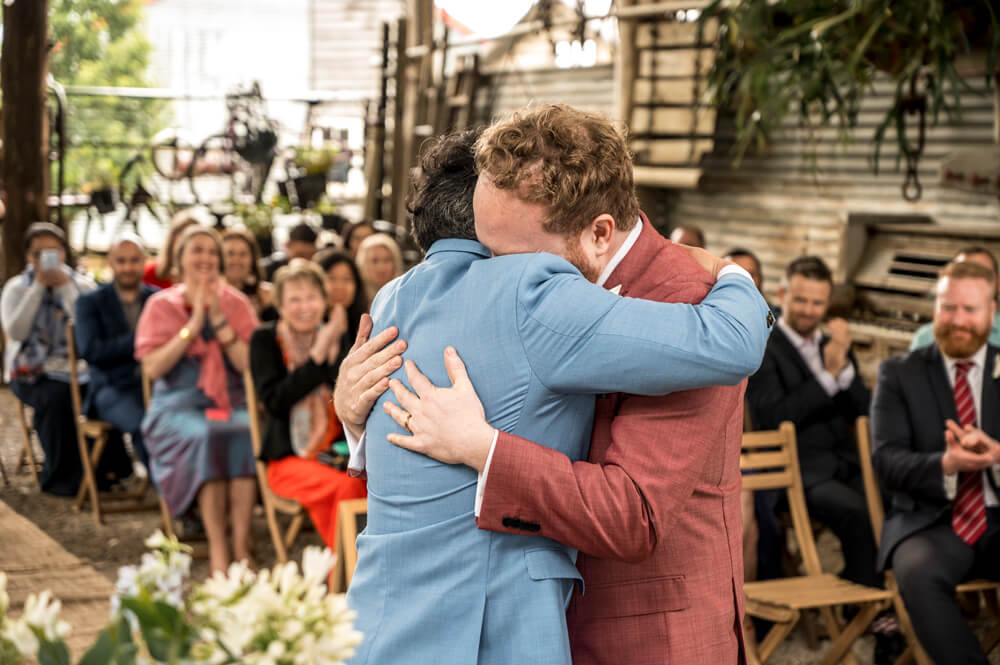 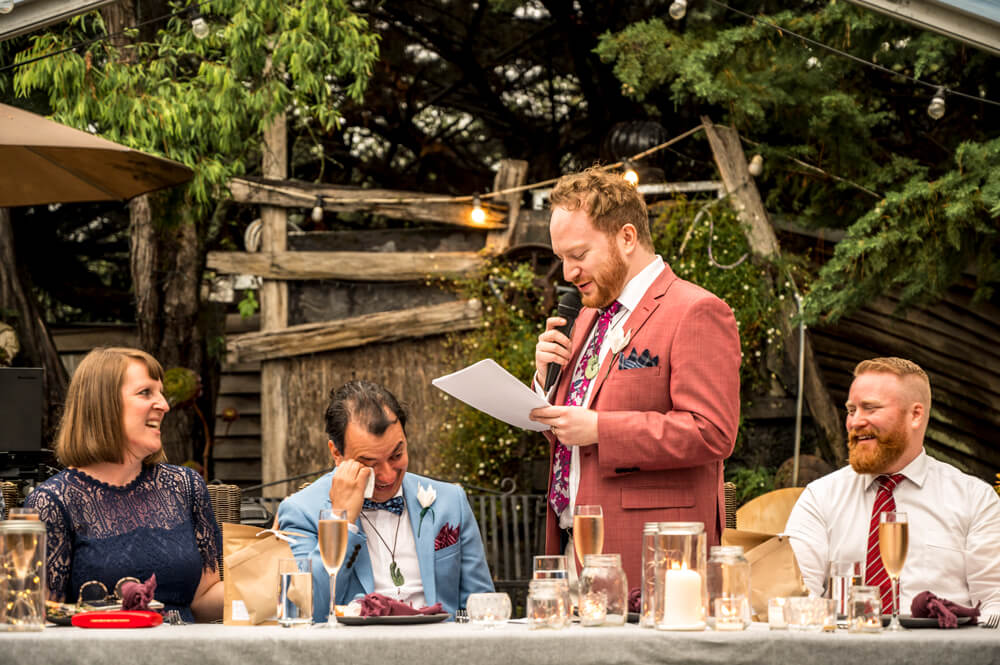 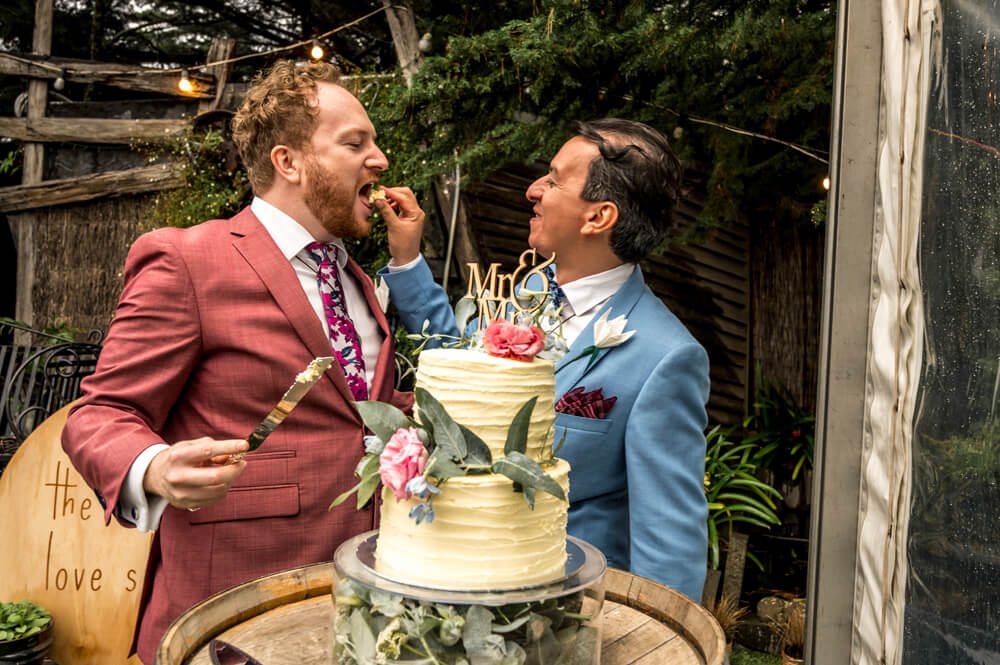 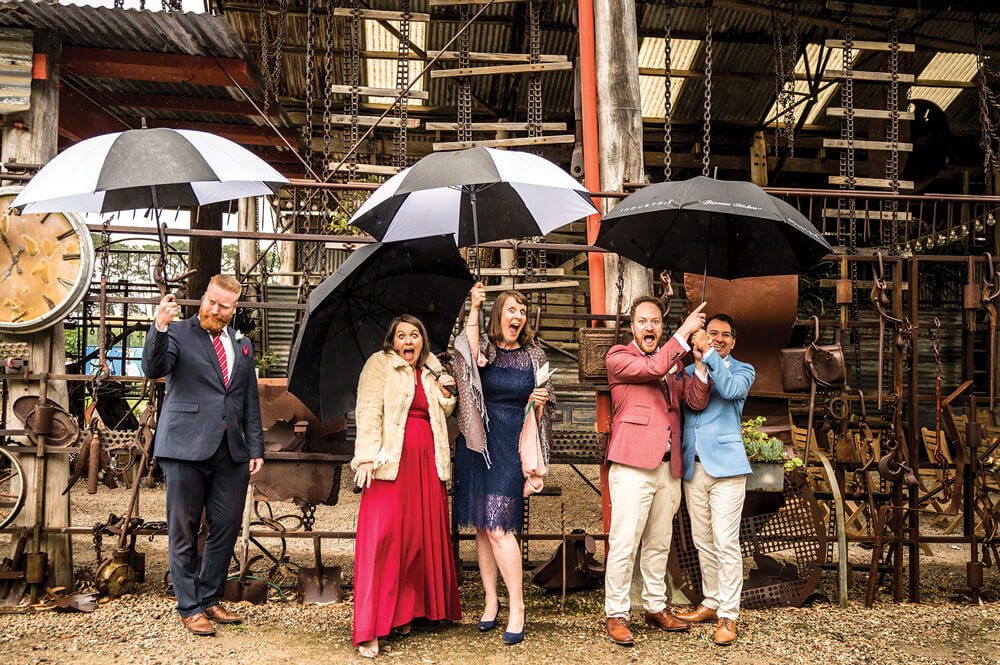